Recipe inspired by the book “Harry Potter and the Deathly Hallows” by J.K. Rowling

“As Harry’s birthday dinner would have stretched the Burrow’s kitchen to breaking point even before the arrival of Charlie, Lupin, Tonks, and Hagrid, several tables were placed end to end in the garden. Fred and George bewitched a number of purple lanterns all emblazoned with a large number 17, to hang in midair over the guests.”

On that warm, slightly blustery, early evening Harry quietly looked around at the motley crew gathered around the two giant, mismatched tables. There were twinkling bubbles floating about like giant fireflies, charmed to light up the party goers. Huge platters of pickled tomatoes with bacon, potatoes with pea pesto, giant roasted turkey legs and many other dishes covered the space between him and his friends. Over the groaning tables filled with dishes, including a 3-tiered cake with a giant Golden Snitch on top, he thought about the lives that were being risked just by being close to him. All of his favorite people, here at this celebration of his coming of age, could be gone in an instant.

Quite morbid birthday dinner thoughts, but with all of the hubbub around his lack of conversation wouldn’t be noticed. He looked over at Ron, grinning goofily at something Hermione had said. Mr. and Mrs. Weasley boisterously laughing with 2 of their sons and Remus. Tonks and Ginny excitedly whispering, about what he could only imagine, but he thought Tonks’ eyes had a joyful mischievousness in them. He bit into a tomato just ripe from the garden, that had been lightly pickled, wrapped in bacon and drizzled with a honeyed glaze made from apple cider. Wow. Mrs. Weasley had really upped her game! 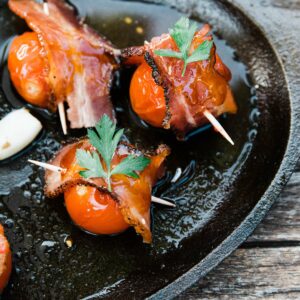